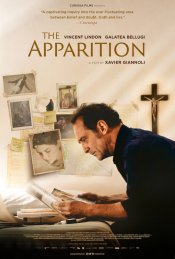 Jacques (Vincent Lindon) is a journalist at a large regional newspaper in France. His reputation as an impartial investigator attracts the attention of the Vatican, who recruit him to lead a committee to explore the legitimacy of a saintly apparition in a small French village—a true canonical investigation. Upon his arrival, he meets the young novitiate Anna, who claims to have personally witnessed an apparition of the Virgin Mary. She’s garnered an impressive following in the village but is torn between her faith and the many solicitations she receives. Confronted with opposing views from clergy members and skeptics, Jacques finds his belief system profoundly shaken as he works to uncover the hidden motivations and pressures at work.

Poll: Will you see The Apparition?

Both Sides of the Blade, Augustine

I Lost My Body, The Death of Louis XIV

Production: What we know about The Apparition?

The Apparition Release Date: When was the film released?

The Apparition was released in 2018 on Friday, September 7, 2018 (Limited release). There were 14 other movies released on the same date, including The Nun, God Blessed the Broken Road and Peppermint.

Q&A Asked about The Apparition

Looking for more information on The Apparition?