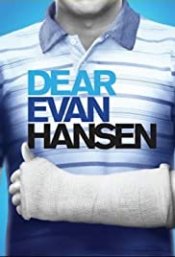 A high schooler who is plagued with social anxiety concocts a story to become closer to the family of a deceased classmate.

"The Hunger Games" , "Everything, Everything"

"Disenchanted" , "The Woman in the Window "

A look at the Dear Evan Hansen behind-the-scenes crew and production team. The film's director Stephen Chbosky last directed Wonder and The Perks of Being a Wallflower. The film's writer Steven Levenson last wrote Tick, Tick…Boom! and Fiddler On The Roof.

Production: What we know about Dear Evan Hansen?

Dear Evan Hansen Release Date: When is the film coming out?

Dear Evan Hansen is coming out in 2021 on Friday, September 24, 2021 (Nationwide release). There are 2 other movies coming out on the same date, including Infinite and The Many Saints of Newark .