Then Came You Movie 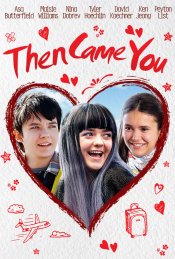 The film tells the story of Skye (Maisie Williams), a spunky teenager with a terminal illness who befriends Calvin (Asa Butterfield), a 19-year old hypochondriac who is afraid of his own shadow. Calvin helps Skye carry out her eccentric bucket list of things to do before she dies. In the process, he learns to confront and conquer his own fears, including falling in love with the beautiful, but seemingly untouchable, Izzy (Nina Dobrev).

Poll: Will you see Then Came You?

Crew: Who's making Then Came You

A look at the Then Came You behind-the-scenes crew and production team. The film's director Peter Hutchings last directed The Outskirts and Departures. The film's writer Fergal Rock last wrote Departures.

Then Came You Trailers & Videos

Production: What we know about Then Came You

Then Came You Release Date: When was it released?

Then Came You was released in 2019 on Friday, February 1, 2019 (Limited release). There were 10 other movies released on the same date, including Miss Bala, Troop Zero and Arctic.

Questions: Asked About Then Came You

Looking for more information on Then Came You?