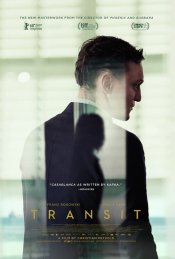 As fascism spreads, German refugee Georg (Franz Rogowski) flees to Marseille and assumes the identity of the dead writer whose transit papers he is carrying. Living among refugees from around the world, Georg falls for Marie (Paula Beer), a mysterious woman searching for her husband--the man whose identity he has stolen.

Poll: Will you see Transit?

Undine, In the Aisles

Production: What we know about Transit?

Transit Release Date: When was the film released?


Transit was a Limited release in 2019 on Friday, March 1, 2019. There were 18 other movies released on the same date, including Tyler Perry's A Madea Family Funeral, Outlaws and Something.
As a Limited release, Transit will only be shown in select movie theaters across major markets. Please check Fandango and Atom Tickets to see if the film is playing in your area.

Transit DVD & Blu-ray Release Date: When was the film released?

Looking for more information on Transit?