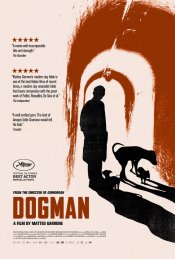 In a seaside village on the outskirts of an Italian city, where the only law seems to be survival of the fittest, Marcello is a slight, mild-mannered man who divides his days between working at his modest dog grooming salon, caring for his daughter Alida, and being coerced into the petty criminal schemes of the local bully Simoncino, an ex-boxer who terrorizes the neighborhood. When Simoncino’s abuse finally brings Marcello to a breaking point, he decides to stand up for his own dignity through an act of vengeance, with unintended consequences.

Poll: Will you see Dogman?

A look at the Dogman behind-the-scenes crew and production team. The film's director Matteo Garrone last directed Pinocchio and Tale of Tales.

Production: What we know about Dogman

Dogman Release Date: When was it released?

Dogman was released in 2019 on Friday, April 12, 2019 (New York / Los Angeles release). There were 15 other movies released on the same date, including Hellboy, Missing Link and After.

Looking for more information on Dogman?