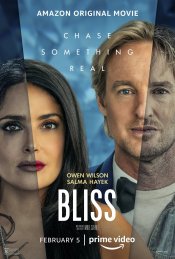 Centers on a recently divorced man (Wilson) who meets a woman (Hayek) who lives on the streets and is convinced that the polluted, broken world around them is not real.

Poll: Will you see Bliss?

Production: What we know about Bliss

Bliss Release Date: When is it coming out?

Bliss is coming out in 2021 on Friday, February 5, 2021 (PrimeVideo release). There are 11 other movies coming out on the same date, including Cinderella, A Glitch In the Matrix and The Right One.

Looking for more information on Bliss?