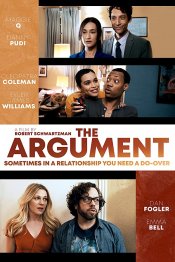 When a couple has an argument at a party, and neither will admit to being wrong, they decide to recreate the evening again and again in order to determine who was right. But this leads to even more confusion, and soon everyone is arguing.

Poll: Will you see The Argument?

Crew: Who's making The Argument

A look at the The Argument behind-the-scenes crew and production team. The film's director Robert Schwartzman last directed The Unicorn. The film's writer Zac Stanford last wrote Sleepwalking and The Chumscrubber.

Production: What we know about The Argument

On or about September 1, 2020, the film was in Completed status.

The Argument Release Date: When was it released?

The Argument was released in 2020 on Friday, September 4, 2020 (VOD / Digital release). There were 6 other movies released on the same date, including Mulan, The Owners and Critical Thinking.

Questions: Asked About The Argument

Looking for more information on The Argument?