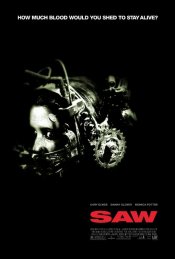 A young man named Adam (Leigh Whannell) wakes to find himself chained to a rusty pipe inside a decrepit subterranean chamber. Chained to the opposite side of the room is another bewildered captive, Dr. Lawrence Gordon (Cary Elwes). Between them is a dead man lying in a pool of blood, holding a .38 in his hand. Neither man knows why he has been abducted; but instructions left on a microcassette, order Dr. Gordon to kill Adam within eight hours. If he fails to do so, then both men will die, and Dr. Gordon's wife, Alison (Monica Potter), and his daughter will be killed. Recalling a recent murder investigation by a police detective named Tapp (Danny Glover), Dr. Gordon realizes he and Adam are the next victims of a psychopathic genius known only as "Jigsaw." With only a few hours left to spare, they must unravel the elaborate puzzle of their fate in the midst of mounting terror. The killer has provided them with only a few clues and two handsaws—too weak to break their steel shackles, but strong enough to cut through flesh and bone...

Poll: Will you see Saw?

"The Unholy" , "Being Charlie"

"Jumanji: The Next Level" , "Checkmate"

A look at the Saw behind-the-scenes crew and production team. The film's director James Wan last directed Aquaman and The Conjuring 2. The film's writer Leigh Whannell last wrote The Invisible Man and Upgrade.

Production: What we know about Saw?

Saw Release Date: When was the film released?

Saw was released in 2004 on Friday, October 29, 2004 (). There were 6 other movies released on the same date, including Enduring Love, The Hollow and Birth.

Looking for more information on Saw?