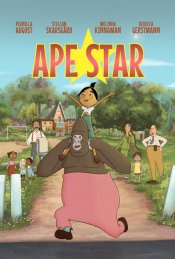 June 5, 2021 • Awaiting release by distributor; release date not yet announced.

Joanna is a feisty young orphan who wants to be adopted more than anything. But when her potential new mom drives up to the orphanage, she gets a big shock when the door opens and a gorilla steps out! The ape and girl quickly overcome their physical differences. But will their newfound love survive the scheming of a local bully who’s out to separate the two?

Poll: Will you see Ape Star?

A look at the Ape Star behind-the-scenes crew and production team.

Production: What we know about Ape Star?

Ape Star Release Date: When is the film coming out?