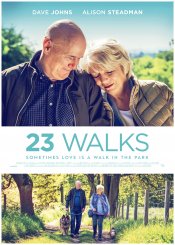 A heart-warming comedy/drama about finding love later in life.

23 WALKS is a heart-warming comedy/drama about finding love later in life. Dave and Fern, two older strangers, have been bruised by their individual circumstance. They meet walking their dogs in a North London park, and over the course of twenty-three walks together romance begins to blossom. But Dave and Fern haven’t been completely honest with one another and their future together may be threatened by the secrets they have withheld.

Production: What we know about 23 Walks?

23 Walks Release Date: When was the film released?

23 Walks was released in 2021 on Friday, September 17, 2021 (Limited release). There were 21 other movies released on the same date, including Cry Macho, Copshop and The Duke.

Looking for more information on 23 Walks?