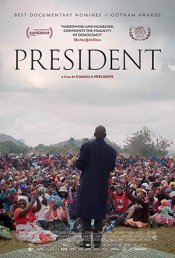 When Robert Mugabe was removed from power, Zimbabwe military leaders promised they would not seize control for themselves but would ensure democracy in a national election. Against a backdrop of economic crisis, food shortages, and political violence, the stakes could not be higher.Working to defeat the ruling party, which has controlled Zimbabwe since independence, is the young and charismatic Nelson Chamisa, who draws comparisons to a young Nelson Mandela in expressing the country’s utmost desire to be “led” and not “ruled”. After decades of a corrupt group clinging to power using any tool available—legal or not—can a free, fair, and transparent election be truly possible? As the follow-up to her widely acclaimed Democrats, Camilla Nielsson brings viewers into the heart of the struggle for power with stunningly close access and unhesitating courage, in a nation closely monitored by the entire world. President is a riveting and epic reminder that, while individuals and their specific ideals may differ, the fight for democracy is never-ending and of profound significance everywhere.

Poll: Will you see President?

A look at the President behind-the-scenes crew and production team.

Production: What we know about President?

President Release Date: When was the film released?

President was released in 2021 on Friday, December 17, 2021 (Limited release). There were 14 other movies released on the same date, including Spider-Man: No Way Home, Nightmare Alley and The Tender Bar.

Looking for more information on President?