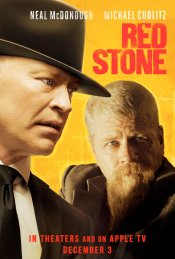 A dangerous hitman (Neal McDonough) is tasked with hunting down a teenager who witnessed the murder of his older brother at the hands of a ruthless Southern crime lord (Michael Cudlitz). The hired gun must track down the boy before either the rival henchmen or the F.B.I. find him first. As the hours tick down, the hitman begins to question his deadly ways and must choose which side he belongs to.

Poll: Will you see Red Stone?

There Are No Saints, Boon

Inside Out, Dark Tourist

Alone in the Dark

Production: What we know about Red Stone?

Red Stone Release Date: When was the film released?

Red Stone was released in 2021 on Friday, December 3, 2021 (Limited release). There were 26 other movies released on the same date, including Dune, Back to the Outback and Last Shoot Out.