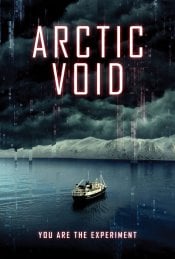 When almost everyone vanishes from a tourist ship in the Arctic, fear becomes the master for the three who remain. Forced ashore and alone in the elements, the men deteriorate in body and mind with the clock now ticking on their survival. In the end, a dark truth emerges that forces them to ally or perish.

Poll: Will you see Arctic Void?

A look at the Arctic Void behind-the-scenes crew and production team.

Production: What we know about Arctic Void?

Arctic Void Release Date: When was the film released?


Arctic Void was a Limited release in 2022 on Friday, January 14, 2022. There were 15 other movies released on the same date, including Scream, Borrego and Delicious.
As a Limited release, Arctic Void will only be shown in select movie theaters across major markets. Please check Fandango and Atom Tickets to see if the film is playing in your area.