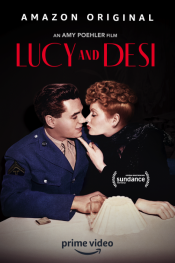 Lucy and Desi explores the unlikely partnership and enduring legacy of one of the most prolific power couples in entertainment history. Lucille Ball and Desi Arnaz risked everything to be together. Their love for each other led to the most influential show in the history of television, I Love Lucy. Desi – an immigrant from Cuba who lost everything in exile, became a band leader, and eventually a brilliant producer and technical pioneer. Lucille came from nothing and, with an unrivaled work ethic, built a career as a model, chorus girl and eventually as an actor in the studio system. She found her calling in comedy, first in radio. When Lucille was finally granted the opportunity to have her own television show, she insisted that her real-life spouse, Desi, be cast as her husband. Defying the odds, they re-invented the medium, on the screen and behind the cameras. The foundation of I Love Lucy was the constant rupture and repair of unconditional love. What Lucy and Desi couldn’t make work with each other, they gave to the rest of the world.

Poll: Will you see Lucy and Desi?

Production: What we know about Lucy and Desi?

Lucy and Desi Release Date: When was the film released?


Lucy and Desi was a PrimeVideo release in 2022 on Friday, March 4, 2022. There were 9 other movies released on the same date, including The Batman, Asking For It and Nightride.

Q&A Asked about Lucy and Desi

Looking for more information on Lucy and Desi?