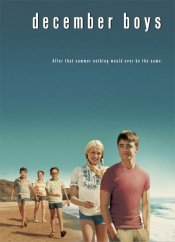 Four teenage orphans find their friendship tested when they encounter a couple who would make the perfect parents.

A story of four orphan teenagers growing up behind the closed doors of a catholic convent in outback Australia. For years the boys watch the younger orphaned kids leave with their newly adopted parents, and have finally come to the realization their time may never come. The Reverend Mother gives the boys something to look forward to by sending them to visit the seaside for the first time. Their long awaited vacation doesn't turn out the way they planned until they meet Teresa and Fearless, a young autocratic couple who would make the perfect parents. Now as grown men, they reflect back on the '60s when, as boys, they spent their first tumultuous summer by the sea, as they sabotaged each other's efforts to be the 'chosen one'--only to discover that the real meaning behind what it is to be a family.

Poll: Will you see December Boys?

A look at the December Boys behind-the-scenes crew and production team.

Production: What we know about December Boys

December Boys Release Date: When was it released?

December Boys was released in 2007 on Friday, September 28, 2007 (). There were 5 other movies released on the same date, including The Seeker: The Dark is Rising, The Game Plan and Lust, Caution.