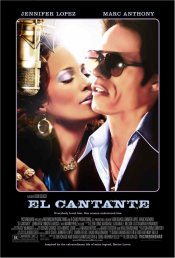 Biopic of Hector Lavoe, one of the biggest Spanish-language singers in the 1970s, but personal tragedy and a heroin addiction left him penniless and dying from complications from AIDS.

The dramatic-biography of Puerto Rican salsa pioneer Hector Lavoe, one of the biggest Spanish-language singers in the 1970s. The tale follows Lavoe's passionate relationship with his love Puchi, and his skyrocket to international fame. But even when he has it all, Lavoe is unable to escape the allure of drugs and his personal pain.

Poll: Will you see El Cantante?

A look at the El Cantante behind-the-scenes crew and production team.

Production: What we know about El Cantante

El Cantante Release Date: When was it released?

El Cantante was released in 2007 on Friday, August 3, 2007 (). There were 5 other movies released on the same date, including Becoming Jane, Hot Rod and Underdog.