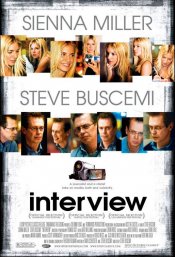 A top political journalist, whose career is fading, has a falling out with his editor, and then, against his will, he has to interview the country's most popular soap actress.

Self-destructive journalist Pierre Peders is no stranger to violence and inhumanity. Having made his name as a war reporter, he has traveled the world seeing some of the most horrifying sights imaginable. So it's no surprise that he's upset when he's demoted to interviewing America's most famous soap star Katya. The two meet and immediately it's a collision of two worlds--Pierre's serious political intentions and Katya's superficial world of celebrity. But as the night progresses and their confessions grow more intimate, Pierre and Katya find a deeper connection, each scarred in their own way. Honest revelations soon give way to punishing decisions and the interview evolves into a passionate verbal chess game spiked with wit, intrigue and sexual tension.

Poll: Will you see Interview?

Interview Cast: Who are the actors?

Film Details & Notes: What do we know about Interview?

Production Timeline: When did the Interview come together?

Interview Release Date: When was it released?

Interview was released in 2007 on Friday, July 13, 2007 There were 3 other movies released on the same date, including Captivity, Harry Potter and the Order of the Phoenix and Shortcut to Happiness.

Looking for more information on Interview