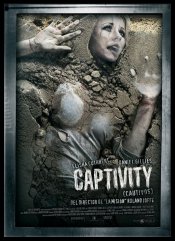 A man and a woman awaken to find themselves captured in a cellar.

A fashion model and a chauffeur are kidnapped and held hostage in a small room by a serial killer. While the madman methodically terrorizes them, the victims draw strength from each other and fall in love.

Poll: Will you see Captivity?

A look at the Captivity behind-the-scenes crew and production team. The film's director Joffe last directed You and I. The film's writer Larry Cohen last wrote Cellular and Phone Booth.

Production: What we know about Captivity

Captivity Release Date: When was it released?

Captivity was released in 2007 on Friday, July 13, 2007 (). There were 3 other movies released on the same date, including Shortcut to Happiness, Harry Potter and the Order of the Phoenix and Interview.

Looking for more information on Captivity?