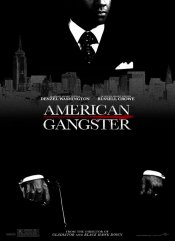 The story revolves around a Harlem heroin kingpin who figured out a way to smuggle heroin in the coffins of American soldiers returning from the Vietnam War.

Based on the life of drug-kingpin-turned-informant, Frank Lucas, who grew up in segregated North Carolina where he watched as his cousin was shot by the Klan for looking at a white girl. He eventually made his way to Harlem where he became a heroin kingpin by traveling to Asia's Golden Triangle to make connections, shipping heroin back to the US in the coffins of soldiers killed in Vietnam. He soon made upwards of one million dollars a day in drug sales. Lucas was shadowed by lawman, Richie Roberts, who finally helped bring the kingpin to justice. The two then worked together to expose the crooked cops and foreign nationals who made importing heroin so easy.

Poll: Will you see American Gangster?

The Greatest Beer Run Ever, Man of Steel

The Space Between Us, Sucker Punch

The Fallout, The In Between

A look at the American Gangster behind-the-scenes crew and production team. The film's director Ridley Scott last directed House of Gucci and The Last Duel. The film's writer Steve Zaillian last wrote Exodus: Gods and Kings and The Girl with the Dragon Tattoo.

Production: What we know about American Gangster?

American Gangster Release Date: When was the film released?

American Gangster was released in 2007 on Friday, November 2, 2007 (). There were 2 other movies released on the same date, including Bee Movie and Martian Child.