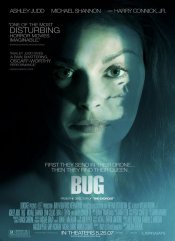 A lonely waitress with a tragic past, Agnes rooms in a run-down motel, living in fear of her abusive, recently paroled ex-husband. But when Agnes begins a tentative romance with Peter, an eccentric, nervous drifter, she starts to feel hopeful again – until the first bug arrives…

Poll: Will you see Bug?

A look at the Bug behind-the-scenes crew and production team. The film's director William Friedkin last directed The Devil and Father Amorth and Killer Joe. The film's writer Tracy Letts last wrote The Woman in the Window and August: Osage County.

Production: What we know about Bug?

Bug Release Date: When was the film released?


Bug was a release in 2007 on Friday, May 25, 2007. There were 2 other movies released on the same date, including Angel-A and Pirates of the Caribbean: At World's End.

Bug DVD & Blu-ray Release Date: When was the film released?

Looking for more information on Bug?