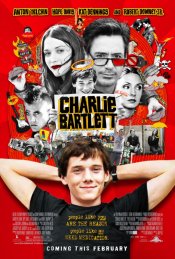 Anton Yelchin plays a wealthy teen who goes to a new public high school and ingratiates himself into its social fabric by using his charm to become the school's resident "psychiatrist." Robert Downey plays the school principal.

Anton Yelchin ("Alpha Dog") stars as Charlie Bartlett, who has been kicked out of every private school he ever attended. And now that he's moved on to public school, he's simply getting pummeled. But when Charlie discovers that the kids who surround him—the outcast and the popular alike—are secretly in desperate need, his entrepreneurial spirit takes over. Hanging up his shingle in the Boys' restroom, Charlie becomes an underground, not to mention under-aged, shrink who listens to the private confessions of his schoolmates, and makes the imprudent decision to hand out the pills he's proffered from his own psychiatric sessions. Meanwhile, at home, Charlie keeps charming his way out of an inevitable confrontation with his adoring but utterly overwhelmed mother Marilyn (Hope Davis.) Then, Charlie Bartlett makes his big mistake: falling in love with the beautiful and bold daughter (Kat Dennings) of the school's increasingly disenchanted Principal (Robert Downey, Jr.), who is hot on his trail. As Charlie Bartlett's world and fledgling psychiatric practice unravel, he begins to discover there's a whole lot more to making a difference than handing out pills.

Poll: Will you see Charlie Bartlett?

Production: What we know about Charlie Bartlett

Charlie Bartlett Release Date: When was it released?

Charlie Bartlett was released in 2008 on Friday, February 22, 2008 (). There were 3 other movies released on the same date, including Be Kind, Rewind, Vantage Point and Witless Protection.