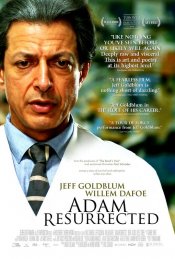 The story focuses on a former Nazi collaborator who later becomes the head of an asylum.

Poll: Will you see Adam Resurrected?

Production: What we know about Adam Resurrected

On or about November 1, 2008, the film was in Post-Production status.

Adam Resurrected Release Date: When was it released?

Adam Resurrected was released in 2008 on Friday, December 19, 2008 (). There were 3 other movies released on the same date, including The Tale of Despereaux, Seven Pounds and Yes Man.