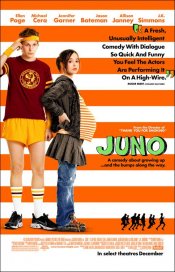 Faced with an unplanned pregnancy, a teenage girl makes some tough choices to find the "perfect" parents for her unborn child.

Juno is a whip-smart teen confronting an unplanned pregnancy by her classmate Bleeker. With the help of her hot best friend Leah, Juno finds her unborn child a "perfect" set of parents: an affluent suburban couple, Mark and Vanessa, longing to adopt. Luckily, Juno has the total support of her parents as she faces some tough decisions, flirts with adulthood and ultimately figures out where she belongs.

Poll: Will you see Juno?

A look at the Juno behind-the-scenes crew and production team. The film's director Jason Reitman last directed The Front-Runner and Tully. The film's writer Diablo Cody last wrote Tully and Ricki and the Flash.

Production: What we know about Juno

Juno Release Date: When was it released?

Juno was released in 2007 on Friday, December 7, 2007 (). There were 5 other movies released on the same date, including The Golden Compass, Atonement and The Moguls.

Looking for more information on Juno?