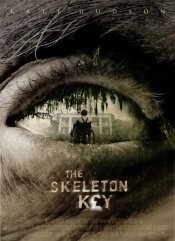 Set largely in the dark atmospheric backwoods just outside of New Orleans, "The Skeleton Key" stars Kate Hudson as Caroline, a live-in nurse hired to care for an elderly woman's (Gena Rowlands) ailing husband (John Hurt) in their home, a foreboding a decrepit Gothic mansion in the Louisiana delta. Intrigued by the enigmatic couple, their mysterious and secretive ways and their rambling house, Caroline begins to explore the old mansion. Armed with a skeleton key that unlocks every door, she discovers a hidden attic room that holds a deadly and terrifying secret.

Poll: Will you see The Skeleton Key?

Crew: Who's making The Skeleton Key

Production: What we know about The Skeleton Key

The Skeleton Key Release Date: When was it released?

The Skeleton Key was released in 2005 on Friday, August 12, 2005 (). There were 6 other movies released on the same date, including Four Brothers, Grizzly Man and The Aristocrats.

Questions: Asked About The Skeleton Key

Looking for more information on The Skeleton Key?