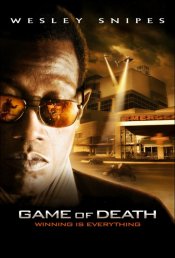 A diplomat's bodyguard and company are injured in a botched assassination attempt. They're all taken to the same hospital, where the bodyguard teams up with a nurse to protect the diplomat from a team of ruthless assassins. The nurse soon learns that there is more to this sticky situation than expected.

Poll: Will you see Game of Death?

Crew: Who's making Game of Death

A look at the Game of Death behind-the-scenes crew and production team. The film's director Abel Ferrara last directed The Projectionist and Tommaso.

Production: What we know about Game of Death

Game of Death Release Date: When was it released?

Questions: Asked About Game of Death

Looking for more information on Game of Death?