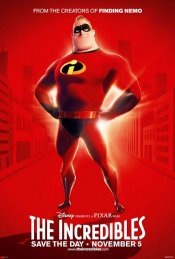 Bob Parr used to be one of the world's greatest superheroes--known to all as Mr. Incredible—saving lives and fighting evil on a daily basis. But now fifteen years later, Bob and his wife—a famous superhero in her own right—have adopted civilian identities and retreated to the suburbs to live normal lives with their three kids. Now he's a clock-punching insurance claims adjuster fighting boredom and a bulging waistline. Itching to get back into action, Bob gets his chance when a mysterious communication summons him to a remote island for a top-secret assignment.

Poll: Will you see The Incredibles?

The Incredibles 2, Won't Back Down

Paws of Fury: The Legend of Hank, Garfield

Book Club 2 – The Next Chapter, The Incredibles 2

Production: What we know about The Incredibles?

The Incredibles Release Date: When was the film released?

The Incredibles was released in 2004 on Friday, November 5, 2004 (). There were 3 other movies released on the same date, including Alfie, Brother to Brother and Fade to Black.

Q&A Asked about The Incredibles

Looking for more information on The Incredibles?