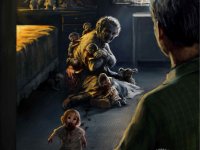 Badly burned in a tragic accident, a firefighter recuperates in a nursing facility catering to the elderly. He initially believes the residents are suffering from delusions but discovers that the home is a place of evil, where residents are systematically murdered by mysterious forces.

Poll: Will you see The Home?

Crew: Who's making The Home

A look at the The Home behind-the-scenes crew and production team.

Production: What we know about The Home

The Home Release Date: When is it coming out?

The Home is coming out To Be Announced (TBA).

Questions: Asked About The Home

Looking for more information on The Home?