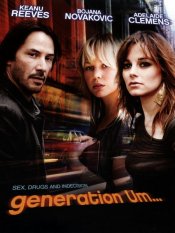 E.B. White wrote “You have to come to New York prepared to be lucky.” generation Um… is a day-in the-life portrait of what life in the city comes to when you’ve waited too long for your dreams to come true. The end of another night out sets the stage for an intimate unfolding of the relationships John, Violet and Mia have, with each other and the city around them. As the day fades into night, secrets are revealed, compromises are made, loneliness is acknowledged, laughter is cherished, lies are dispelled and disappointment is dealt with - and the unusual circumstance that binds these three late-night characters together comes into focus.

Poll: Will you see Generation Um...?

A look at the Generation Um... behind-the-scenes crew and production team.

Production: What we know about Generation Um...

On or about September 11, 2010, the film was in Pre-Production status.

Generation Um... Release Date: When was it released?

Generation Um... was released in 2013 on Friday, May 3, 2013 (Limited release). There were 16 other movies released on the same date, including Iron Man 3, Love Is All You Need and The Iceman.