It Started With Revenge. 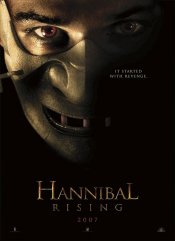 After the death of his parents during World War II, young Hannibal Lecter moves in with his uncle and his beautiful wife and begins plotting revenge on the barbarians responsible for his sister's death.

Mischa and Hannibal (Gaspard Ulliel), baby brother and sister, are inseparable; it is their love for each other that ties their bond. Their companionship is forever binding, until, with their family, while hiding from the Nazi war machine a twisted set of circumstance sets the pace for a most vicious attack on the future of one Hannibal Lecter for the sworn vengeance for the brutal killing of his baby sister. Years later, we find Hannibal, the teenager, setting up in Paris, and living with his aunt Lady Murasaki Shikibu (Li Gong) and studying at medical school here he finds his forte. Still searching for his sister's murderers, still bitter and still ever hopeful of satisfying his desire for retribution. This chance arrives, and soon we are to learn that for a pound of flesh lost a pound of flesh must be repaid. This is the horrific tale of justice and honour, a young mans growing pains that will have the guilty paying with more than just flesh and bone. This is the up and rising tale of the young Hannibal, prey you do not meet him, for meat you shall be to him. Taste his wroth.

Poll: Will you see Hannibal Rising?

Production: What we know about Hannibal Rising

Hannibal Rising Release Date: When was it released?

Hannibal Rising was released in 2007 on Friday, February 9, 2007 (). There were 2 other movies released on the same date, including Norbit and The Lives of Others.