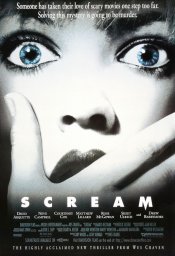 Afer a series of mysterious deaths, a seemingly peaceful community becomes a place where no one is safe ... and everyone is suspect! That's when an offbeat group of friends rally to unlock the town's deadly secrets.

Poll: Will you see Scream?

He's All That, Looney Tunes: Back in Action

Going All The Way: The Director’s Edit, Conan The Barbarian

A look at the Scream behind-the-scenes crew and production team. The film's director Wes Craven last directed Scream 4 and My Soul to Take. The film's writer Kevin Williamson last wrote Scream 4 and Cursed.

Production: What we know about Scream?

Scream Release Date: When was the film released?

Looking for more information on Scream?