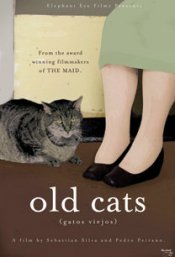 Isidora, an old woman, discovers that her mind is quickly deteriorating. At an apparently relaxed dinner table, she will desperately try to hide her state from her daughter, a demanding woman who awaits any sign of senility in order to take away everything she has.

Poll: Will you see Old Cats?

A look at the Old Cats behind-the-scenes crew and production team. The film's writer Pedro Peirano last wrote No and The Maid.

Production: What we know about Old Cats

Old Cats Release Date: When was it released?

Old Cats was released in 2011 on Friday, March 4, 2011 (New York release). There were 8 other movies released on the same date, including Take Me Home Tonight, The Adjustment Bureau and Beastly.