A Case Of You Movie 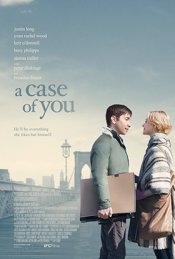 Young writer Sam has a crush on Birdie, the cute and quirky barista at his local coffee shop. When his conventional attempts to woo her crash and burn, he takes his efforts online, creating an Internet profile embellished with all of the details that would make him Birdie’s dream guy: ballroom dancing, rock climbing, a seemingly endless, escalating series of wacky and unlikely hobbies. When the harebrained scheme is a surprise success and Birdie falls for his exaggerated alter ego, Sam must keep up the act or lose his dream girl forever.

Poll: Will you see A Case Of You?

Crew: Who's making A Case Of You

A look at the A Case Of You behind-the-scenes crew and production team. The film's director Kat Coiro last directed And While We Were Here and L!fe Happens.

A Case Of You Trailers & Videos

Production: What we know about A Case Of You

A Case Of You Release Date: When was it released?

Questions: Asked About A Case Of You

Looking for more information on A Case Of You?