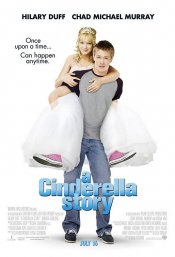 In this twisted and hilarious update of the classic fairy tale, high school senior Sam Montgomery (Hilary Duff) lives at the beck and call of her self-obsessed step-mother Fiona (Jennifer Coolidge) and her sinfully wicked step-sisters. Sam finds her less-than-sparkling social life wonderfully complicated when she meets her prince charming online. But when her anonymous cyber soul mate turns out to be her high school's uber-popular quaterback Austin Ames (Chad Michael Murray), Sam makes a mad dash back to reality, leaving her cell phone behind just before the clock strikes midnight. Fearing rejection if her secret is revealed, Sam dodges Austin's efforts to discover the identity of his princess. Will Sam let fear hold her back or will she find the courage to be herself and claim the life she's always wanted? Her chance at happily ever after depends on it.

Poll: Will you see A Cinderella Story?

Frank and Penelope, The Grudge

Production: What we know about A Cinderella Story?

A Cinderella Story Release Date: When was the film released?

A Cinderella Story was released in 2004 on Friday, July 16, 2004 (). There were 5 other movies released on the same date, including I, Robot, Flavors and Touch of Pink.

Q&A Asked about A Cinderella Story

Looking for more information on A Cinderella Story?