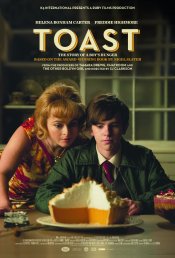 Based on the memoir of food writer and Nigel Slater, a nostalgic trip through everything edible in 1960's Britain.

Poll: Will you see Toast?

A look at the Toast behind-the-scenes crew and production team. The film's writer Lee Hall last wrote Cats and Rocketman.

Production: What we know about Toast

Toast Release Date: When is it coming out?

Toast is coming out To Be Announced (TBA).

Looking for more information on Toast?