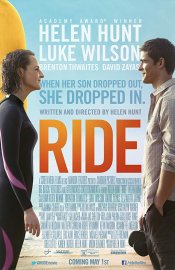 A strong-willed mother follows her 20-year-old son to L.A. after he quits college to become a surfer. Each ends up finding their own version of love in unlikely places.

Poll: Will you see Ride?

Production: What we know about Ride

Ride Release Date: When was it released?

Ride was released in 2015 on Friday, May 1, 2015 (Limited release). There were 5 other movies released on the same date, including The Avengers: Age of Ultron, Hyena and Far From The Madding Crowd.

Looking for more information on Ride?