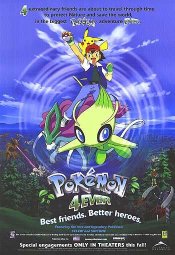 The action centers on the backstory of the mysterious new Pokemon, the winged green Celebi, who is a strange time-traveler creature that has powers over nature as well as time and space, bringing new adventures to Ash, Pikachu, and their friends.

Poll: Will you see Pokemon 4Ever?

Crew: Who's making Pokemon 4Ever

A look at the Pokemon 4Ever behind-the-scenes crew and production team. The film's director Kunihiko Yuyama last directed Pokemon Heroes and Pokemon: Arceus and The Jewel of Life.

Production: What we know about Pokemon 4Ever

Pokemon 4Ever Release Date: When was it released?

Pokemon 4Ever was released in 2002 on Friday, October 11, 2002 (). There were 8 other movies released on the same date, including Brown Sugar, Tuck Everlasting and Jerry Seinfeld: Comedian.

Questions: Asked About Pokemon 4Ever

Looking for more information on Pokemon 4Ever?