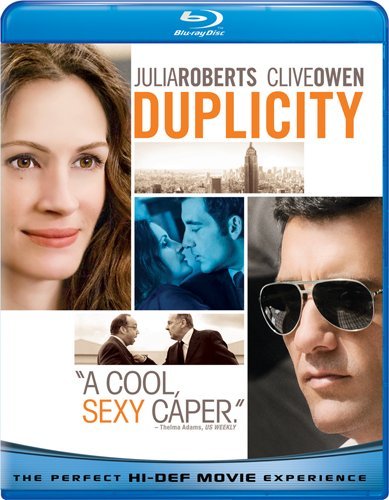 Oscar® winner Julia Roberts and Clive Owen reunite for "Duplicity," from writer/director Tony Gilroy (seven-time Oscar®-nominated "Michael Clayton"). In the film, they star as spies-turned-corporate operatives in the midst of a clandestine love affair. When they find themselves embroiled in a high-stakes espionage game, they discover the toughest part of the job is deciding how much to trust the one you love.

CIA officer Claire Stenwick (Roberts) and MI6 agent Ray Koval (Owen) have left the world of government intelligence to cash in on the highly profitable cold war raging between two rival multinational corporations. Their mission? Secure the formula for a product that will bring a fortune to the company that patents it first.

For their employers—industry titan Howard Tully (Tom Wilkinson) and buccaneer CEO Dick Garsik (Paul Giamatti)— nothing is out of bounds. But as the stakes rise, the mystery deepens and the tactics get dirtier, the trickiest secret for Claire and Ray is their growing attraction. And as they each try to stay one double-cross ahead, two career loners find their schemes endangered by the only thing they can't cheat their way out of: love.