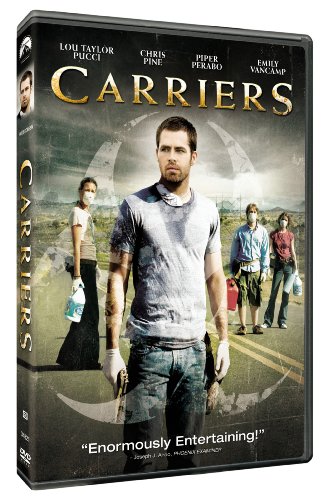 Four kids are driving through the desert on the way to the beach, their faces anything but cheery: this isnt Spring Break. Theyre trying to outrun the end of the world and each other. In Álex and David Pastors CARRIERS, no one is safe from the viral pandemic threatening to wipe out the human race. Determined to elude the deadly virus, Danny (LOU TAYLOR PUCCI), his brother Brian (CHRIS PINE), his girlfriend Bobby (PIPER PERABO) and Dannys school friend Kate (EMILY VANCAMP) speed across the Southwestern U.S. to reach a place of possible safety. Over the course of four days, the group is faced with moral decisions that no human should ever be forced to face. They discover that their greatest enemy is not the microbe attacking humanity, but the darkness within themselves.