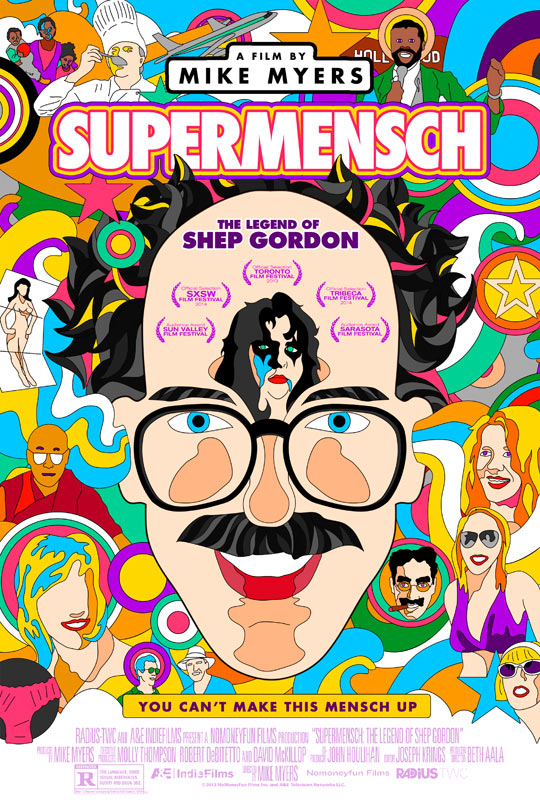 In 1991, music manager Shep Gordon held Mike Myers over a barrel a few weeks before shooting “Wayne’s World” regarding an Alice Cooper song Myers wanted to use in the film. They have been close friends ever since. Twenty-two years later, the story of Gordon’s legendary life in the uber fast lane is now told in Myers’ directorial debut. And this time it’s Myers who has Gordon over a barrel.

Shep Gordon is the consummate Hollywood insider. Though he isn’t a household name, Gordon has become a beacon in the industry, beloved by the countless stars he has encountered throughout his storied career. Shep is known for managing the careers of Alice Cooper as well as stints with Blondie, Luther Vandross and Raquel Welch, among others – a career that began with a chance encounter in 1968 with Janis Joplin and Jimi Hendrix. He even found time to invent the “Celebrity Chef.” Though the chef as star is part of the culture now, it took Shep's imagination, and his moral outrage at how the chefs were being treated, to monetize the culinary arts into the multi-billion dollar industry it is today. Personal friends with the Dalai Lama through his philanthropic endeavors with the Tibet Fund and the guardian of four children, Gordon’s unlikely story told by those who know him best, his pals, including Alice Cooper, Michael Douglas, Sylvester Stallone, Anne Murray, Willie Nelson, Emeril Lagasse and more.

Like this Supermensch: The Legend of Shep Gordon Primary Poster—Share It!