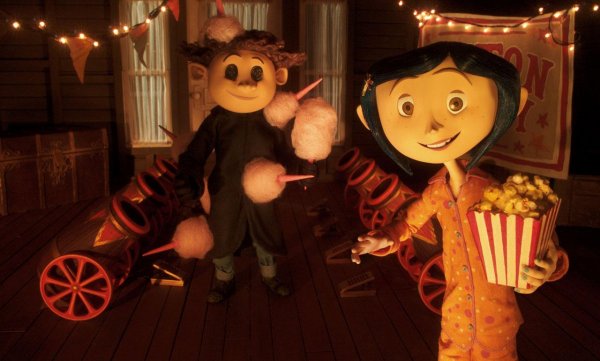 Combining the visionary imaginations of two premier fantasists, director Henry Selick (“The Nightmare Before Christmas”) and author Neil Gaiman (Sandman), this new movie is a wondrous and thrilling, fun and suspenseful adventure that honors and redefines two moviemaking traditions. It is a stop-motion animated feature – and, as the first one to be conceived and photographed in stereoscopic 3-D, unlike anything moviegoers have ever experienced before. Coraline Jones (voiced by Dakota Fanning) is a girl of 11 who is feisty, curious, and adventurous beyond her years. She and her parents (Teri Hatcher, John Hodgman) have just relocated from Michigan to Oregon. Missing her friends and finding her parents to be distracted by their work, Coraline tries to find some excitement in her new environment. She is befriended – or, as she sees it, annoyed – by a local boy close to her age, Wybie Lovat (Robert Bailey Jr.); and visits her older neighbors, eccentric British actresses Miss Spink and Miss Forcible (Jennifer Saunders and Dawn French) as well as the arguably even more eccentric Russian Mr. Bobinsky (Ian McShane). After these encounters, Coraline seriously doubts that her new home can provide anything intriguing to her….but it does; she uncovers a secret door in the house. Walking through the door and then venturing through an eerie passageway, she discovers an alternate version of her life and existence. On the surface, this parallel reality is similar to her real life – only much better. The adults, including the solicitous Other Mother (also voiced by Teri Hatcher) seem much more welcoming to her. Coraline is more the center of attention there – even from the mysterious Cat (Keith David). She begins to think that this Other World might be where she belongs. But when her wondrously off-kilter, fantastical visit turns dangerous and Other Mother schemes to keep her there, Coraline musters all of her resourcefulness, determination, and bravery to get back home – and save her family.