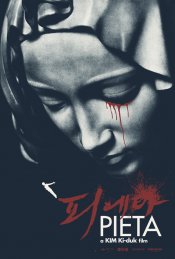 In this intense and haunting story, a loan shark living an isolated and lonely existence uses brutality to threaten and collect paybacks from desperate borrowers for his moneylender boss. He proficiently and mercilessly collects the debts without regard to the pain he causes his countless victims. One day, a mysterious woman appears in front of him claiming to be his long-lost mother. After coldly rejecting her at first, he gradually accepts her in his life and decides to quit his cruel job and seek a decent, redemptive life. However, he soon discovers a dark secret stemming from his past and realizes it may be too late to escape the horrific consequences already set in motion from his previous life.

Poll: Will you see Pieta?

A look at the Pieta behind-the-scenes crew and production team.

Production: What we know about Pieta

Pieta Release Date: When was it released?

Pieta was released in 2013 on Friday, May 17, 2013 (Limited release). There were 10 other movies released on the same date, including Star Trek Into Darkness, The English Teacher and 33 Postcards.

Looking for more information on Pieta?