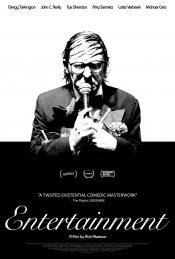 Follows an aging comedian (Gregg Turkington) as he performs at a string of underwhelming venues starting in Bakersfield, Calif.

Poll: Will you see Entertainment?

A look at the Entertainment behind-the-scenes crew and production team. The film's director Rick Alverson last directed The Mountain and The Comedy.

Production: What we know about Entertainment

Entertainment Release Date: When was it released?

Entertainment was released in 2015 on Friday, November 13, 2015 (Limited release). There were 10 other movies released on the same date, including The 33, By The Sea and My All American.

Looking for more information on Entertainment?