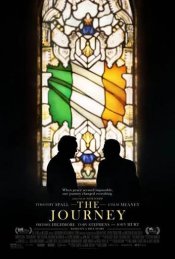 The Journey is the account of how two men from opposite sides of the political spectrum came together to change the course of history. In 2006, amidst the ongoing, decades-long conflict in Northern Ireland, representatives from the two warring factions meet for negotiations. In one corner is Ian Paisley (Timothy Spall), the deeply conservative British loyalist; in the other is Martin McGuinness (Colm Meaney), a former Irish Republican Army leader who has devoted his life to the cause of Irish reunification. Opposites in every way, the two men at first seem to have little chance of ever finding common ground. But over the course of an impromptu, detour-filled car ride through the Scottish countryside, each begins to see the other less as an enemy, and more as an individual—a breakthrough that promises to at last bring peace to the troubled region.

Poll: Will you see The Journey?

Crew: Who's making The Journey

A look at the The Journey behind-the-scenes crew and production team. The film's director Nick Hamm last directed Killing Bono and Godsend.

Production: What we know about The Journey

Production is scheduled to begin in mid-September 2015.

The Journey Release Date: When was it released?

The Journey was released in 2017 on Friday, June 16, 2017 (Limited release). There were 12 other movies released on the same date, including All Eyez On Me, Rough Night and Cars 3.

Questions: Asked About The Journey

Looking for more information on The Journey?