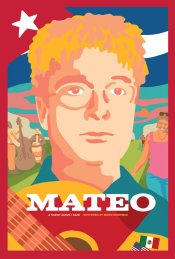 Mateo follows America’s most notorious gringo mariachi singer on his misadventures in Cuba. Matthew Stoneman dreamed of pop stardom. Instead, he went to jail, learned Spanish, and emerged as “Mateo,” America’s first white mariachi singer. Mateo is on the brink of completing an album of original songs in Havana. But his estrangement from friends and family, his criminal past, and his love for Cuban women could derail him on his quest for fame.

Poll: Will you see Mateo?

A look at the Mateo behind-the-scenes crew and production team.

Production: What we know about Mateo

Mateo Release Date: When was it released?

Mateo was released in 2015 on Friday, August 21, 2015 (Limited release). There were 11 other movies released on the same date, including Sinister 2, Hitman: Agent 47 and American Ultra.

Looking for more information on Mateo?