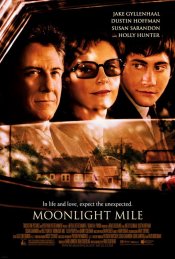 When Joe Nast's (Jake Gyllenhaal) plans for marriage change due to an unexpected loss, he wants to be the man he believes everyone wants him to be - dutifully bereaved husband-to-be and perfect would-be son-in-law to Ben (Dustin Hoffman) and JoJo (Susan Sarandon). But when another woman unexpectedly enters his life, he's quickly torn between fulfilling his new role and following his heart.

Poll: Will you see Moonlight Mile?

A look at the Moonlight Mile behind-the-scenes crew and production team. The film's director Brad Silberling last directed An Ordinary Man and Land of the Lost.

Production: What we know about Moonlight Mile

Moonlight Mile Release Date: When was it released?

Moonlight Mile was released in 2002 on Friday, September 27, 2002 (). There were 2 other movies released on the same date, including The Tuxedo and Sweet Home Alabama.