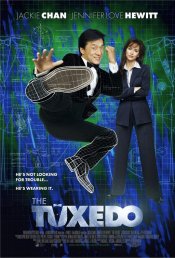 A New York City taxicab driver is hired to be a chauffeur for a mysterious man named Clark Devlin. When Devlin is hospitalized, the driver takes over Devlin's covert mission for the U.S. government: to uncover the secret scheme of bottled water broker Diedrich Banning. The driver also inherits Clark's computerized tuxedo, which gives its wearer supernatural powers of combat, camouflage and seduction.

Poll: Will you see The Tuxedo?

Crew: Who's making The Tuxedo

A look at the The Tuxedo behind-the-scenes crew and production team.

Production: What we know about The Tuxedo

The Tuxedo Release Date: When was it released?

The Tuxedo was released in 2002 on Friday, September 27, 2002 (). There were 2 other movies released on the same date, including Moonlight Mile and Sweet Home Alabama.

Questions: Asked About The Tuxedo

Looking for more information on The Tuxedo?