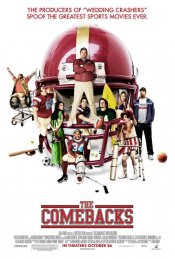 A football coach with the worst losing record in the history of the sport goes for a shot at redemption with a ragtag college team.

A comedy that spoofs the story of an out-of-luck coach, Lambeau Fields, who takes a rag-tag bunch of college misfits and drives them towards the football championships. In the process, of course, this life-long loser discovers that he is a winner after all--redeeming himself, saving his relationship with his family and friends, and finds that there is indeed, no I in team!

Poll: Will you see The Comebacks?

Crew: Who's making The Comebacks

A look at the The Comebacks behind-the-scenes crew and production team. The film's director Tom Brady last directed Bucky Larson: Born to Be a Star and The Hot Chick.

Production: What we know about The Comebacks

The Comebacks Release Date: When was it released?

The Comebacks was released in 2007 on Friday, October 19, 2007 (). There were 5 other movies released on the same date, including Rendition, Things We Lost in the Fire and 30 Days of Night.

Questions: Asked About The Comebacks

Looking for more information on The Comebacks?