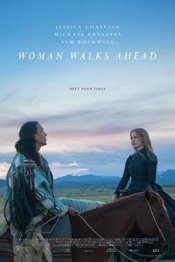 Set in the 19th Century, Caroline Weldon moves from Brooklyn to the Standing Rock Reservation in Dakota Territory to help Sioux chieftain Sitting Bull keep the land for his people.

Poll: Will you see Woman Walks Ahead?

Crew: Who's making Woman Walks Ahead

A look at the Woman Walks Ahead behind-the-scenes crew and production team. The film's director Susanna White last directed Our Kind of Traitor and Nanny McPhee Returns. The film's writer Steven Knight last wrote Serenity and The Girl in the Spider's Web: A New Dragon Tattoo Story.

Production: What we know about Woman Walks Ahead

On or about February 3, 2016, the film was in Development status.

Woman Walks Ahead Release Date: When was it released?

Woman Walks Ahead was released in 2018 on Friday, June 29, 2018 (Limited release). There were 10 other movies released on the same date, including Sicario: Day of the Soldado, Uncle Drew and Leave No Trace.

Questions: Asked About Woman Walks Ahead

Looking for more information on Woman Walks Ahead?