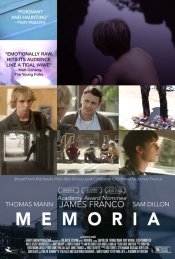 Based on James Franco’s “Palo Alto Stories” and “A California Childhood”, Ivan Cohen is a young boy living in Palo Alto, California. Unsatisfied by his slacker group of friends, his love for a girl who doesn’t know he exists, and a dysfunctional family life, he is struggling to find his place in the world. Memoria raises questions about the memories we choose to keep, the ones we try desperately to forget, and the ones we use as fuel to create our future.

"This is the End" , "The Pineapple Express"

A look at the Memoria behind-the-scenes crew and production team.

Production: What we know about Memoria?

Memoria Release Date: When was the film released?

Memoria was released in 2016 on Friday, May 6, 2016 (Limited release). There were 8 other movies released on the same date, including Captain America: Civil War, Bite and Being Charlie.