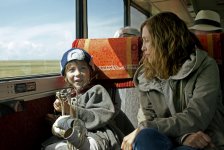 A family in emotional turmoil is taken by surprise when an eccentric 8-year-old American boy, Wes, has an existential epiphany—He believes that he is in fact a Mongolian goat herder. When Wes befriends a similarly displaced Indian immigrant they both decide it’s their destiny to connect the child’s dream to his reality through the use of crowdfunding. Their journey to the mysterious plains of Mongolia throws the boy’s family further into disarray, leading his desperate mother on a trip across the world, with her son, in order to make their family whole again.

Poll: Will you see Burn Your Maps?

Burn Your Maps Cast: Who stars in it?

Crew and Production Credits: Who's making Burn Your Maps?

A look at the Burn Your Maps behind-the-scenes crew and production team. The film's director Jordan Roberts last directed 3, 2, 1... Frankie Go Boom and Around the Bend.

Production Timeline: When did the Burn Your Maps come together?

Burn Your Maps Release Date: When was it released?

Burn Your Maps was released in 2019 on Friday, June 21, 2019 (Limited release). There were 11 other movies released on the same date, including Toy Story 4, Child's Play and Anna.

Questions: Asked About Burn Your Maps

Looking for more information on Burn Your Maps?